The business was founded in 1871 by Joseph Forshaw, a cabinetmaker from England. He began by making the wood molds for sand castings used for making coal stove parts. He later began having his own parts cast, and became the largest supplier of coal stove repair parts in the region. The business was expanded by his son, Joseph Forshaw Jr., a bronze-medal winning Olympic marathon runner, to include fireplaces and fireplace fixtures. Joseph Forshaw III and his partner and brother-in-law L. F. DuBois moved the business from downtown to Frontenac in 1956 and added patio furniture and barbecues, as well as beginning a wholesale trade to dealers and builders. The fourth generation, Rick and Joe Forshaw, have established a nationwide network of dealers for wood fireplace mantels and custom sheet metal products. 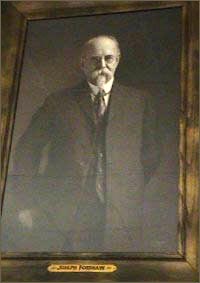